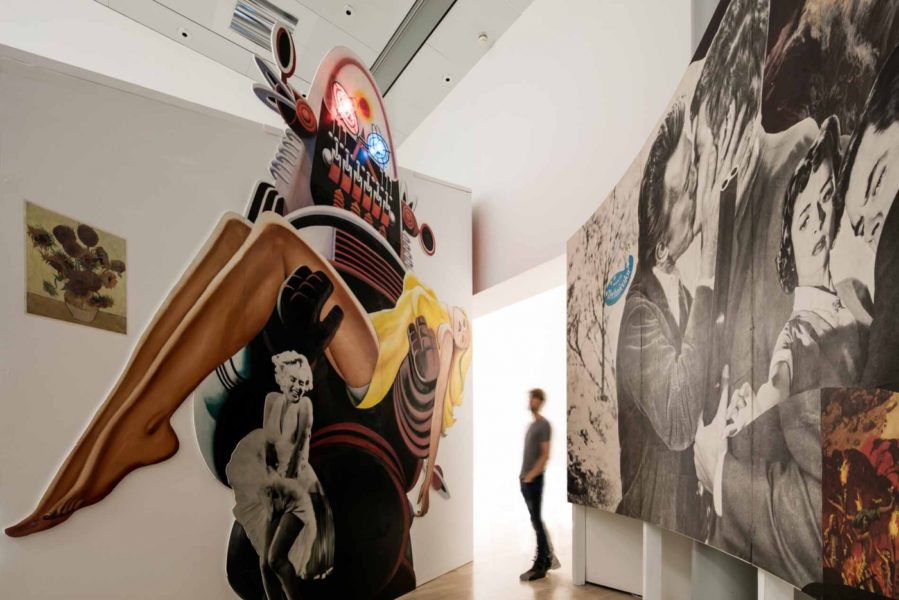 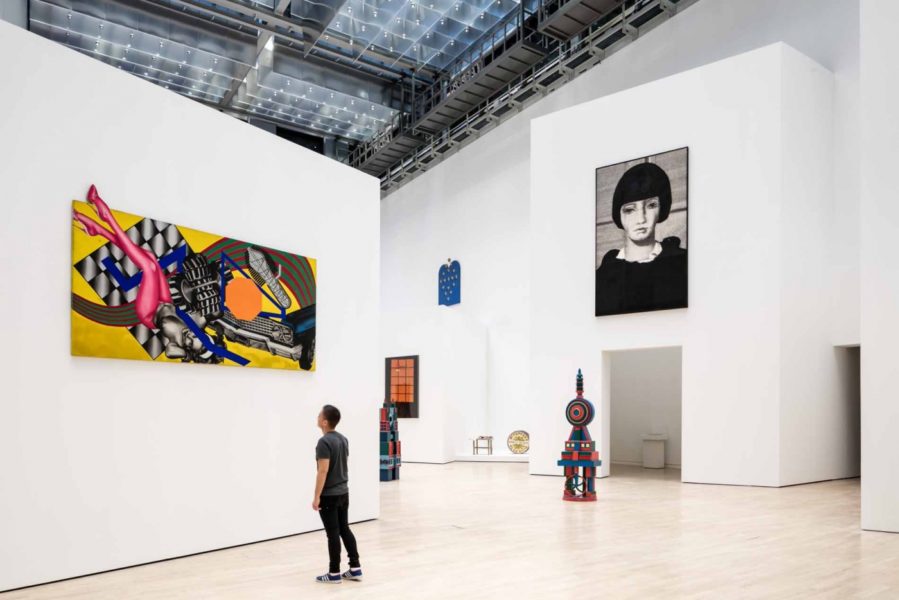 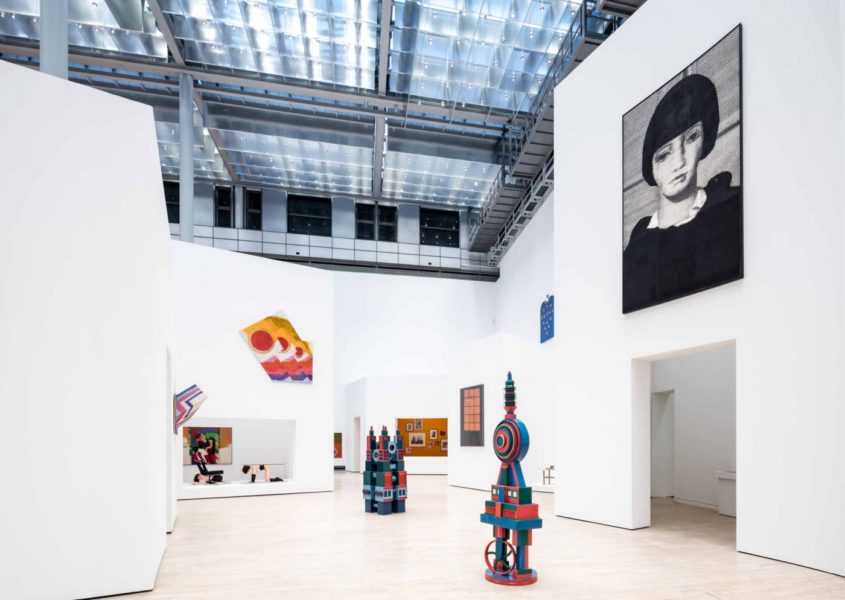 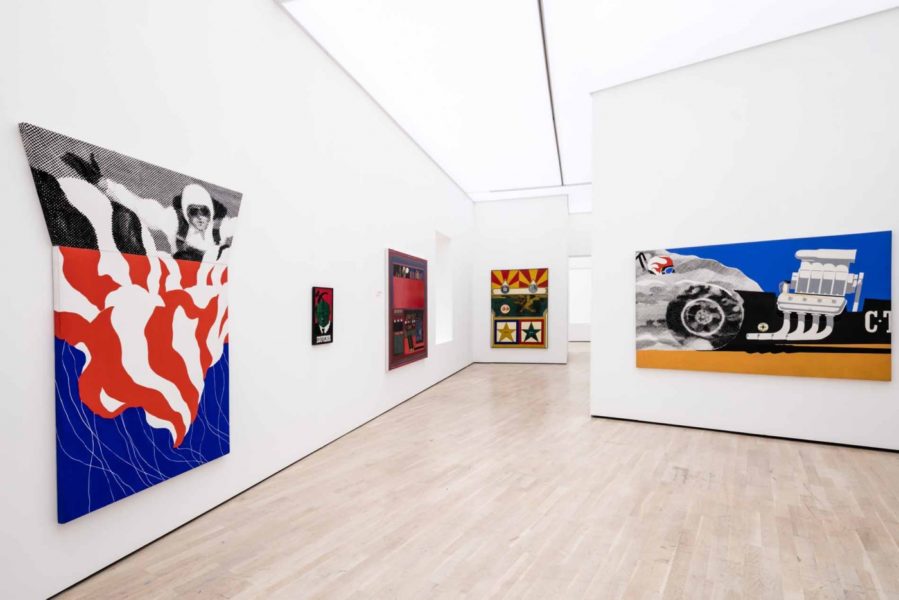 Richard Hamilton’s trail­bla­zing multi­media instal­la­tion “Fun House” was realized for the exhibi­tion “this is tomorrow” in London in 1956. Exactly sixty years later, the retro­spec­tive survey “This Was Tomorrow” at the Kunst­mu­seum Wolfsburg brings together not only painting, sculpture, collage, archi­tec­ture, drawing and instal­la­tion, but also film, music, televi­sion and photo­graphy in one multi­media, spatial mise-en-scène, to create a compre­hen­sive panorama of Pop Art in Great Britain.

What exactly is new and different about this exhibi­tion in terms of art and cultural history? On one hand, there’s the intense look at female protago­nists of Pop Art, the strong focus on the future-oriented archi­tects Alison and Peter Smithson, Cedric Price, and Archigram (each of whom was closely linked to the art scene), as well as the deter­mined inclusion of music, magazines, televi­sion, and film as media of equal value that also crossed borders. Second, there’s the expanded timeframe: the exhibi­tion ranges from Eduardo Paolozzi’s early Parisian collages from 1947 to the climax and culmi­na­tion of “Swinging London” around Mick Jagger and Robert Fraser, the star gallerist and pop-networker par excel­lence, in 1968.

Atmos­phe­ri­cally dense interior spaces reflect the intense encoun­ters among artists, the dreari­ness of the English capital in the post-war years, and the first future-oriented art and archi­tec­ture projects. Nigel Henderson’s powerful, black-and-white photos of a recon­struc­tion full of privation are juxta­posed here with the Smithsons’ models and drawings for their “House of the Future”. Comics, science fiction, scien­tific book illus­tra­tions, adver­ti­se­ments, Hollywood films, and magazine pages are shown as sources of inspi­ra­tion that go beyond classic concepts of high and low art. Following the spatial explosion of Richard Hamilton’s “Fun House”, which has been recon­structed in all its sensual details, including a jukebox and the scent of straw­ber­ries, visitors enter a veritable “city of the sixties” in the grand hall of the Kunstmuseum.

In the 16-meter-high hall, visitors encounter streets, squares, and artist’s houses of various sizes and heights for the highly indivi­dual, and often closely related—in terms of both friendship and thematic content—stakeholders of the art and cultural scene of the “Swinging Sixties”: key protago­nists such as Peter Blake, David Hockney, R. B. Kitaj and Allen Jones, along with generally lesser-known but essential figures such as Derek Boshier, Peter Phillips, Richard Smith, Gerald Laing, Patrick Caulfield, Antony Donaldson, Colin Self and Joe Tilson, as well as the often neglected, decidedly feminine stances of Pauline Boty and Jann Haworth can be experi­enced there in larger groups of works.

In every case, it’s about exempli­fying and bringing to life the numerous cross-connec­tions, largely forgotten today, between the then incre­a­singly fluid forms of culture and their creative stake­hol­ders. The exhibition’s broad scope—ranging from the initial spark of Paolozzi’s early magazine collages and the works by Colin Self and Gerald Laing, which oscillate between nuclear fear and a euphoric belief in progress, to Hamilton’s pictorial relief of Mick Jagger and Robert Fraser in handcuffs after being arrested for drug abuse—enables visitors to experi­ence the artistic and cultural-histo­rical signi­fi­cance of British Pop Art with all their senses, while presen­ting this period as an essential prehistory of our own present day.

Curators of the exhibition