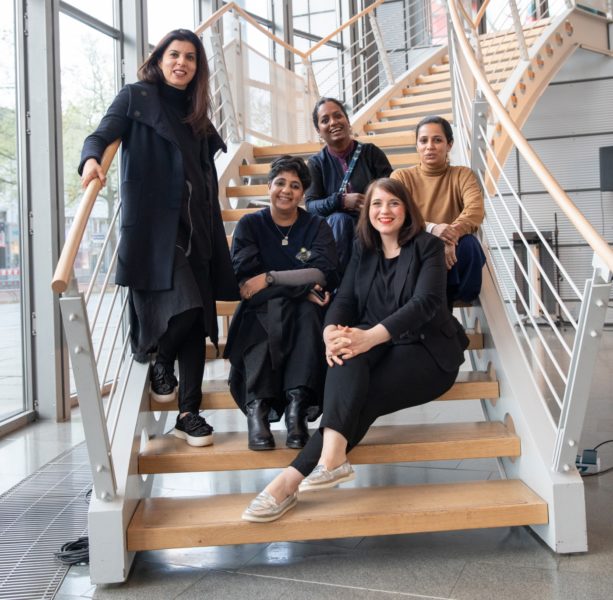 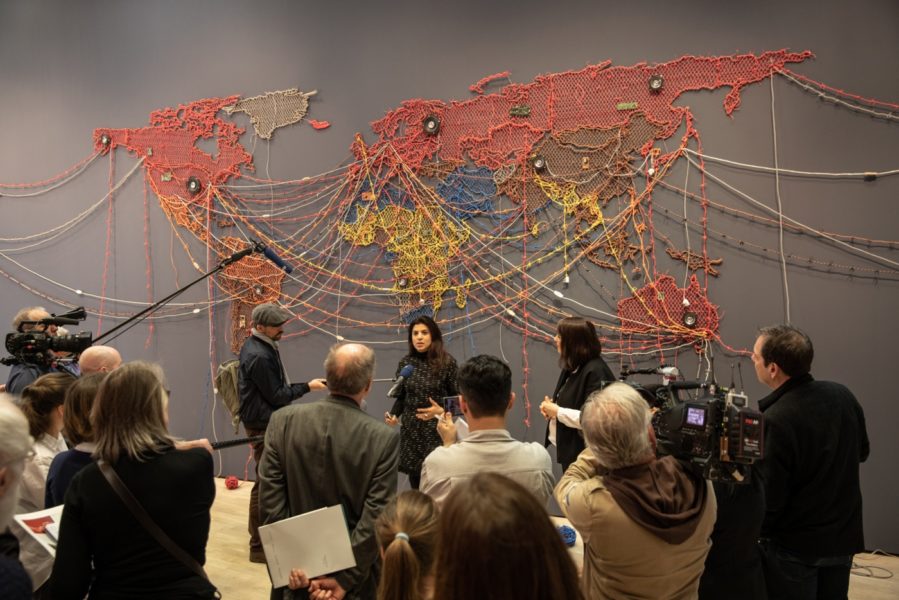 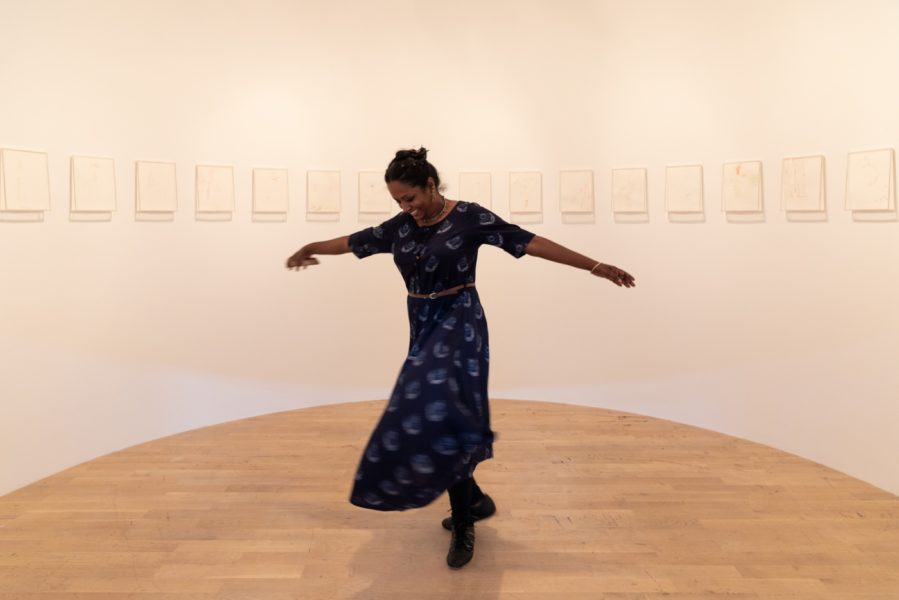 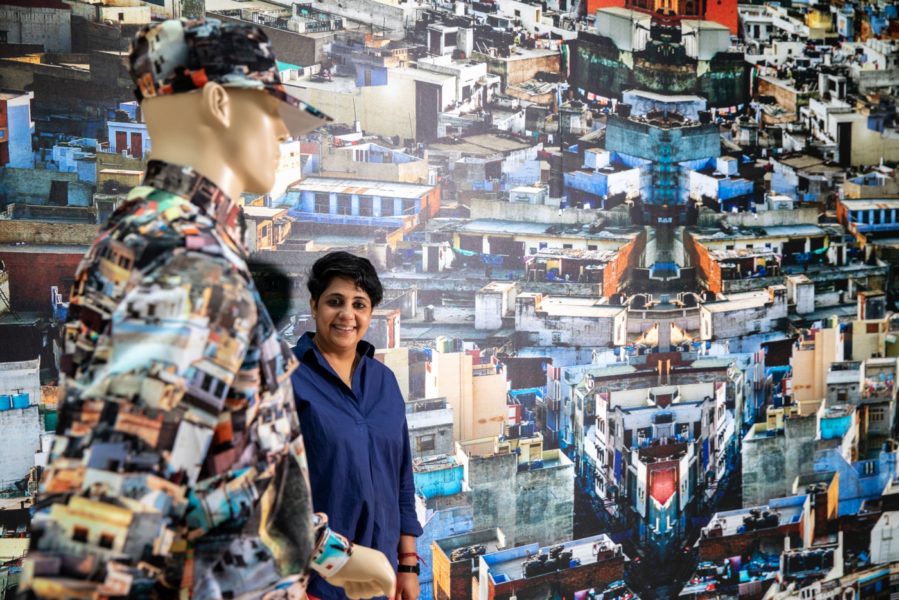 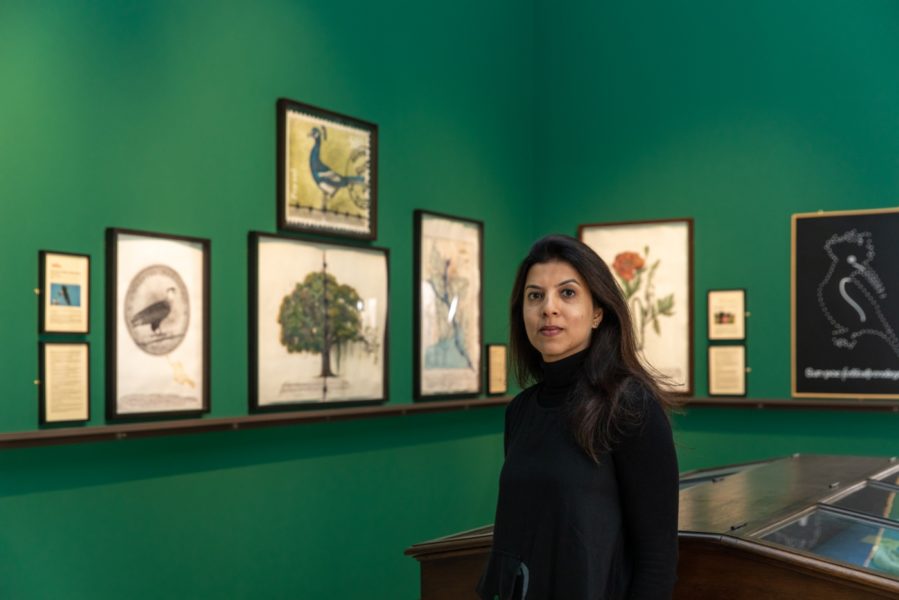 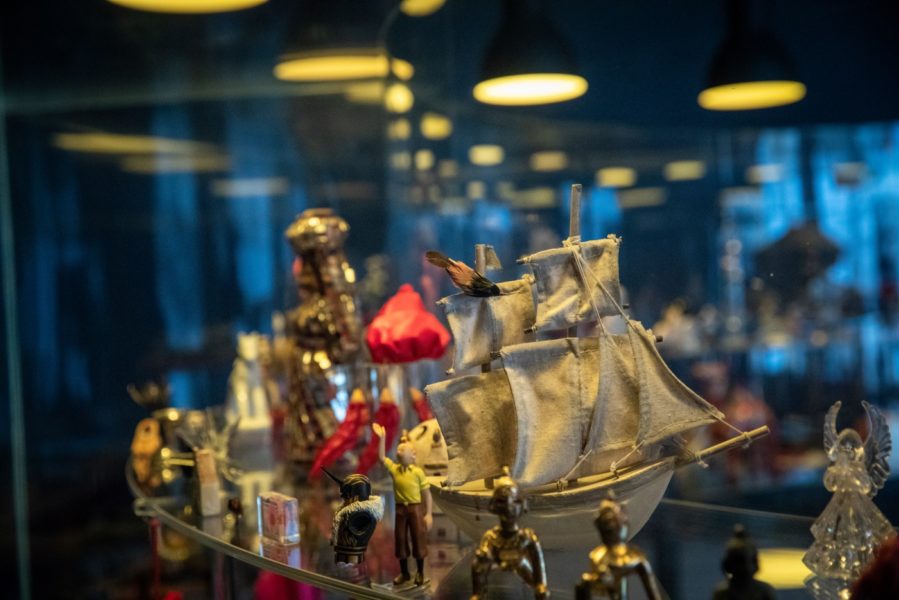 How do women artists in India use their voices today? How do they deal with their social respon­si­bi­lity? Which language do they find for that which remains unsaid? For the first time in Germany, the Kunst­mu­seum Wolfsburg is presen­ting an exhibi­tion with works by six women artists from India. Vibha Galhotra (b. 1978), Bharti Kher (b. 1969), Prajakta Potnis (b. 1980), Reena Saini Kallat (b. 1973), Mithu Sen (b. 1971), and Tejal Shah (b. 1979) face the reality of India and negotiate this in their works both artis­ti­cally and politically.

Although women and men have equal legal status, Indian society is profoundly marked by patri­archy. India finds itself in a state of funda­mental social change, yet it remains torn between the poles of tradition and progress — and in this field of tension, women are still strongly disad­van­taged. The rapid develo­p­ment of urban India thus runs contrary to the living condi­tions in rural areas. Countless ethni­ci­ties, castes, languages, cultures, religions, and philo­so­phies form an osten­sibly plura­listic society, in which identity is defined by diffe­ren­tia­tion from the respec­tive other. The social structure of India thus reflects that of our global community as a whole, which basically struggles with the same issues.

“Facing India” examines the question of how one’s own national history, present, and future manifest themselves from a female point of view. In their multi­media works, Vibha Galhotra, Bharti Kher, Prajakta Potnis, Reena Saini Kallat, Mithu Sen, and Tejal Shah shift attention towards histo­rical and contem­porary conflicts. Poetic, metapho­rical, and quiet, but also radical, direct, and loud — they question borders of all kinds, be these political, terri­to­rial, ecolo­gical, religious, social, personal, or gender-based. The history of these borders, their visibi­lity and invisi­bi­lity, their legiti­macy, and not seldom their disso­lu­tion are the themes of the works presented in “Facing India”. The exhibi­tion focuses on six positions in order to present these more compre­hen­si­vely. Socia­lized and educated in an incre­a­singly globa­lized world, these women artists no longer limit their “border controls” solely to India, but rather reach out into other countries and conti­nents. The state, society, and the indivi­dual, as well as questions regarding identity and the environ­ment, are criti­cally examined. Nevertheless, as broad as their range of topics may be, explicit and implicit references to the presence of the feminine and the position of women, as well as solida­rity and empathy, are recurring themes throughout the exhibition.

“Facing India” was developed out of a conti­nuing dialog with the artists and reflects a kind of collec­tive plea for commu­ni­ca­tion and the notion of unity in diversity beyond pigeon­hole thinking and caste mentality. The exhibi­tion archi­tec­ture incor­po­rates these ideas. Each of the six artists has her own separate exhibi­tion space, which are arranged to provide clear visual relations to each other. The center of the exhibi­tion is an open commu­ni­ca­tion forum, which allows the visitor a view in all direc­tions — both literally and metaphorically.

The catalog, edited by Ralf Beil and Uta Ruhkamp in separate German and English versions, with a preface by Ralf Beil and an intro­duc­tion by Uta Ruhkamp, essays by Urvashi Butalia, head of the feminist publi­shing house Zubaan, and Roobina Karode, director of the Kiran Nadar Museum of Art in New Delhi and Noida, as well as in-depth inter­views with all six artists conducted by Uta Ruhkamp. 240 pages with 150 illus­tra­tions, 24 x 31 cm, hardcover, 38 € in the museum shop.

The works of Vibha Galhotra (b. 1978) revolve around the question of what it means to work as a visual artist in the Anthropo­cene. Is it possible to address social, ecolo­gical, and political issues such as climate change through artistic practice without having the aesthe­tics of the works draw full attention to the artist and norma­li­zing devas­ta­ting problems? The object of her inves­ti­ga­tions are the five elements: water, earth, air, fire, and ether. With an osten­sibly roman­ti­ci­zing pictorial language, Galhotra addresses problems such as the conta­mi­na­tion of the sacred Yamuna River and the concen­tra­tion of parti­cu­late matter in Delhi, which exceeds all permis­sible values. The anti-pollution mask becomes an everyday article of clothing, alarming climate graphics are trans­formed into a wave of bells reminis­cent of Arte povera, and the cleansing of plants becomes Zen medita­tion. With her works, Vibha Galhotra reacts to human irratio­na­lity in the “Age of Reason.” Their aesthe­ti­ciz­a­tion of the ecolo­gical catastrophe is simul­ta­ne­ously a strategy of mediation and an ironic refraction.

Bharti Kher (b. 1969) is the only artist in the exhibi­tion who was born in the diaspora in London. She has been living in India since 1992 and thus has a dual perspec­tive onto the patri­ar­chal society of her country. Her works are born out of the obser­va­tion of her everyday surroundings—objects, articles, and charac­te­ristic features—which she recon­tex­tua­lizes as “objet trouvés” or ready-mades. Decisive identi­fying signs of women in India, such as bindis, saris, or bracelets, become artistic media and, despite the absence of the body, suggest the presence of the feminine. Kher’s approach is based not on repro­duc­tion, but rather on sugges­tion. With her works, she addresses classical questions of materials and compo­si­tion; but as an avowed feminist, she does not shy away from clear, socially critical state­ments. Her black “Deaf Room” stands for the muted voices of countless women, while “Six Women” addresses the maltreated bodies of sex workers in Kolkata. Bharti Kher bursts the bounda­ries of the tradi­tional image of women in India and allows women to take on multiple identi­ties, prefer­ably as the stronger sex.

Prajakta Potnis (b. 1980), the youngest artist in the exhibi­tion, lends expres­sion to her obser­va­tions of society in an indirect and metapho­rical manner. She under­stands material and physical bounda­ries, such as various kinds of walls and skin, as permeable membranes. Which traces do they bear? What penetrates through them, and what influ­ences our psyche? Prajakta Potnis makes that visible which grows rampant invisibly in our society, like a virus that infects everyday life. As a starting point for her inquiry, she chooses the place with the strongest female connotation—not only in India—namely the home and especially the kitchen, which fasci­nates her as a conflict zone between tradition and the proli­fe­ra­tion of techno­logy. The dryer, the blender, the refri­gerator, and the freezer become negotia­tion sites for political and ecolo­gical issues, outdated ideolo­gies, social criticism, and questions of identity. The personal becomes political when an atomic mushroom-like caulif­lower suggests genetic manipu­la­tion, the valves of pressure cookers refer, like small grenades, to the feeling of a constant threat of terrorism or the surveil­lance state, or miniature escala­tors in a refri­gerator recall a global “nowhere” of inter­ch­an­ge­able shopping malls and airports which negate any sense of local identity.

That which separates and that which connects are leitmo­tifs in the work of Reena Saini Kallat (b. 1973). She is, however, not only interested in disputed terri­to­rial borders, but also in social and psycho­lo­gical barriers. Despite its barbed wire aesthe­tics, her work “Woven Chronicle”—a map of the world composed of electrical cables—which traces global migration routes, stands not only for inter­na­tional border conflicts, but also functions as a metaphor for networks: a manifesto of potential commu­ni­ca­tion. Fully in line with this, nature in Reena Saini Kallat’s works exempli­fies that which humankind is not capable of, either histo­ri­cally or in the present, namely peaceful coexis­tence on an equal footing, a lived pluralism of cultures. With her “Hyphen­ated Lives”, she thus creates a world of animal and botanical hybrids, comprised of the typical flora and fauna of two states in conflict with each other, be these India and Pakistan or Texas and Mexico. Reena Saini Kallat names the nameless and sees in retro­spec­tion an oppor­tu­nity to look ahead. In “Crease/Crevice/Contour”, she does not hesitate to inscribe the female body with the violence suffered during the Indo-Pakistani partition in 1947 as a visible wound and speaks clearly in favor of a culture of memory instead of one of silence.

Mithu Sen (b. 1971) makes her own rules and defies catego­riz­a­tion. For her all-encom­pas­sing revolt, she has chosen the prefix “un‑,” which simul­ta­ne­ously negates an occur­rence or a statement: (un)becoming, un(home), un(construct), un(mything), and even un(mithu). In her drive to dissolve bounda­ries, Mithu Sen breaks down not only language into its component parts, only to piece it back together again. The site of her reflec­tion is the body. In her paintings, drawings, sculp­tures, and instal­la­tions, she overlaps female and male sexual charac­te­ris­tics, flowers and fruits, as well as human and animal elements, to create bizarre and shocking hybrids. Univer­sals of human and animal existence, such as hair, bones, or teeth, question not only estab­lished hierar­chies and bounda­ries between the sexes, but also those between ethni­ci­ties, castes, and species. With the radical­ness of her visual language, she stridently breaks taboos. Her will to dissolve extends as far as insti­tu­tional criticism. With her “Museum of Unbelon­gings” (2018), she thus puts forth the idea of a democratic museum of margi­na­lized things, which makes due without labels and hierar­chies. All objects have the same value—a metaphor for an egali­ta­rian world without borders.

Tejal Shah (b. 1979) repres­ents one of the most radical positions within the contem­porary Indian art scene. Her work revolves around the question of the pure essence of existence. She searches for answers in extremely divergent fields, including Buddhism, studies on commu­ni­ca­tion between humans and animals, and queer-feminist or post-porn theories. In her complex work “Between the Waves”—a five-channel video instal­la­tion which premiered at the “documenta 13”—creatures that appear to have fallen out of time and space explore a primeval and simul­ta­ne­ously undeniably contem­porary world, all the while following their natural instincts, in which they indulge themselves in front of the camera without shame. Unmistakable is her demand for the acknow­led­ge­ment of a flexible under­stan­ding of gender, beyond binary, biolo­gical, and socially construed gender roles. This is reflected in works such as “Women Like Us” and “I AM”, a portrait gallery of Indian women, whose self-under­stan­ding does not corre­spond with conser­va­tive notions of female identity, or “Untitled (On Violence)”, in which she openly addresses the violence of the state against the so-called “third gender” (hijra). With her works, Tejal Shah provo­ca­tively and directly advocates social justice and a society free of taboos and, in doing so, oversteps the bounda­ries of activism. 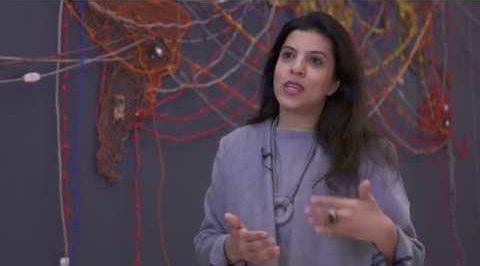 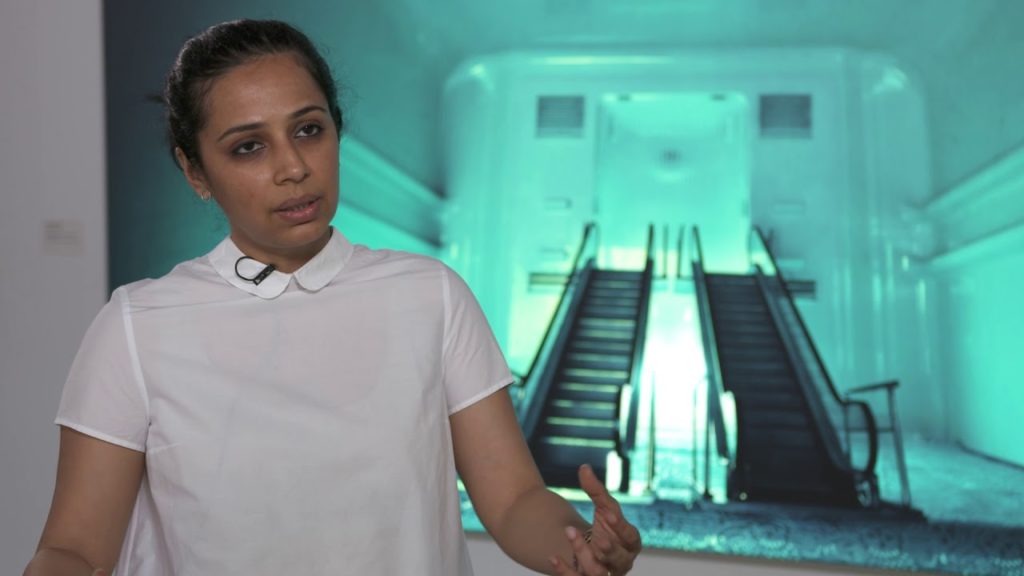 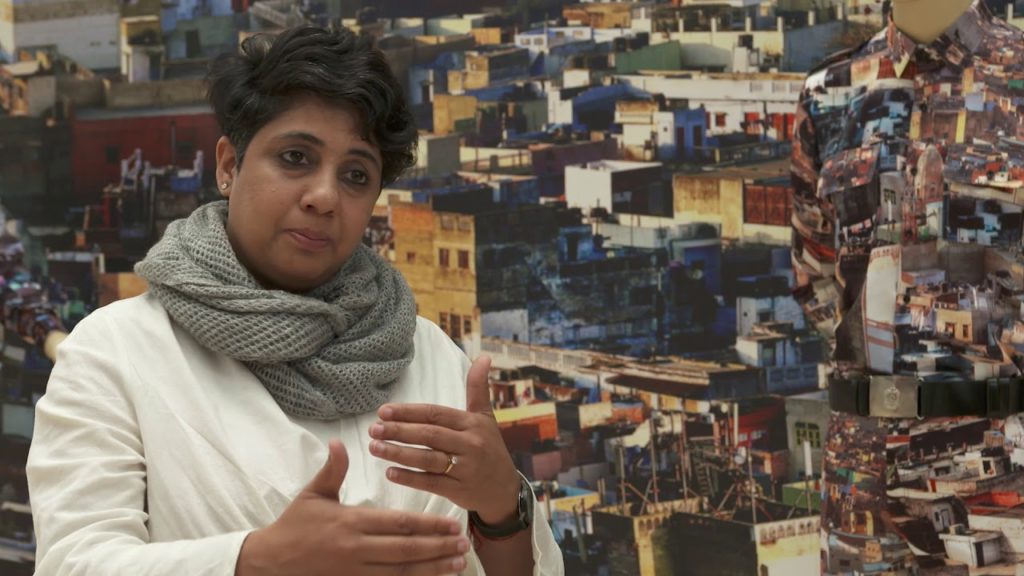 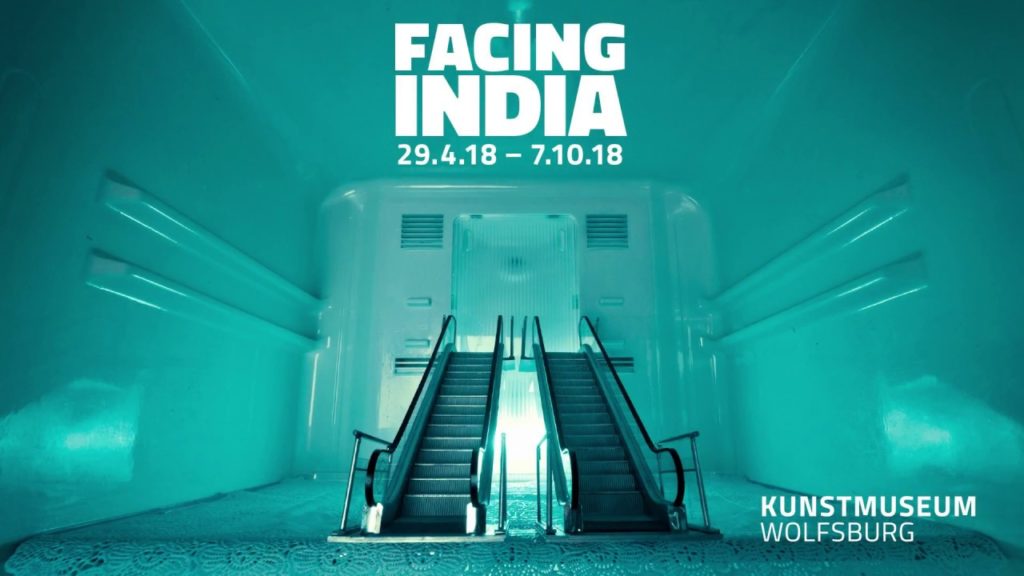