The Kunst­mu­seum is celebra­ting its 20th birthday. It is marking the occasion with the exhibi­tion “Oskar Kokoschka. Humanist and Rebel”, which is primarily devoted to the portraits by this extra­ord­ninary modern artist. The show recalls the start of the Kunstmuseum’s success story in 1994 with a retro­spec­tive on the work of the French artist Fernand Léger. Even before then, namely between 1952 and 1967, the former chairman of Volks­wagen Heinrich Nordhoff initiated much-noticed exhibi­tions on Franz Marc, Lovis Corinth and Vincent van Gogh.

In Oskar Kokoschka’s (1886–1980) portraits we encounter one of the most extra­or­di­nary artists of the 20th century. His life and work were shaped by the emergence of the avant-garde amidst the social and political turmoil of his day. Kokoschka himself repres­ents the golden thread through this exhibi­tion in the Kunst­mu­seum Wolfsburg: the people he knew and his view of humanity and society. Over and above their artistic quality, Kokoschka’s portraits reveal him to be a true humanist and rebel. With his distinc­tive expres­sive painting style and dramatic use of brush­strokes he was further­more a decisive influence on the so-called “Neue Wilde” of the 1980s.

The Kunst­mu­seum is celebra­ting its 20th birthday with this special exhibi­tion. It ties onto the museum’s opening in 1994 with works by Fernand Léger and likewise recalls the major art events extending back to the young city of Wolfsburg’s early post-war period. Between 1952 and 1967, Heinrich Nordhoff, former chairman of Volks­wagen, initiated much-noticed exhibi­tions on Franz Marc, Lovis Corinth and Vincent van Gogh in addition to thematic shows on German and French painting as well as Japanese woodcuts.

When the young Oskar Kokoschka entered the stage of art in Vienna with his passio­na­tely restless works, he encoun­tered the milieu of Viennese modernism. Arriving in Berlin in 1910, he was actively parti­ci­pated in Herwarth Walden’s magazine “Der Sturm” with his prints, exhibited together with artists from the Berlin Secession and created a stir with his plays. As a painter, print­maker and author Oskar Kokoschka advanced not only to become one of the most prominent propon­ents of Viennese modernism but also one of the most idiosyn­cratic advocates of Expressionism.

“Oskar Kokoschka. Humanist and Rebel” is oriented on the develo­p­ment of this excep­tional oeuvre. The starting point of the exhibi­tion encom­pas­sing 55 paintings and 138 works on paper in Kokoschka’s time at the Kunst­ge­wer­be­schule in Vienna (1905−1908), his work for the Wiener Werkstätte and contri­bu­tions to the Kunst­schau 1908, which is still regarded today as a pionee­ring event in the history Viennese modernism. The spirit of a new beginning and the avant-garde influ­enced by such perso­na­li­ties as Gustav Klimt, Sigmund Freud, Gustav Mahler and Arthur Schnitzler exuded throughout Vienna. In 1909, the multi­ta­lented Oskar Kokoschka caused a scandal with his one-act play “Murderer, the Hope of Women”, and subse­quently shaved his head to protest the hefty criticism directed at him and his work. This was followed by Kokoschka’s early portraits, most of which were produced in Vienna between 1909 and 1914 thanks to the inter­ces­sion of Adolf Loos, among them of friends such as the journa­list and satirist Karl Kraus and the actor Karl Etlinger. In his expres­sive pictorial inven­tions from this time, which are oriented on the person and his surroun­dings, he rebelled against the predo­mi­nant histo­ri­cism and the ornament-governed Art Nouveau. His years in Berlin from 1910 to 1916, during which he frequently travelled to Vienna, are distin­guished by the colla­bo­ra­tion with Herwarth Walden and his magazine “Der Sturm”. When Kokoschka went to Berlin in 1910 he became acquainted with Franz Marc and met with such artists as Else Lasker-Schüler, Rudolf Blümner, Peter Baum, Richard Dehmel and Alfred Kerr, whose portraits can be found in the exhibi­tion. His stormy affair with Alma Mahler, the widow of the composer Gustav Mahler, between 1912 and 1914 inspired numerous paintings, prints and drawings in addition to his first pieces on the theme of music. But when Alma Mahler aborted their joint child and two of them separated, Kokoschka fell into a deep crisis and volun­te­ered for active service in the Austrian army.

Kokoschka was seriously wounded in World War I. After recovering, he accepted a profes­sor­ship in Dresden, where he taught from 1916 to 1923. During this time, Kokoschka reinvented himself both artis­ti­cally and perso­nally. As a means of overco­ming the separa­tion, he commis­sioned a live-sized doll modeled after Alma Mahler in 1918. This curious object also served as the motifs for a series of portraits. The most signi­fi­cant change resulting from the inter­rup­tion of artistic activity caused by the war was his transi­tion from a painting style based largely on drawing in which the line dominated to a manner of painting in which form was constructed from the starting point of color.

Kokoschka left Dresden in 1923 in order to travel through Europe and North Africa. He returned to Vienna in 1931 after these extensive trips on which he painted numerous animal pictures, but he commuted back and forth between there and Paris during the next several years. He left Austria for good in 1934 because of the political situation, fleeing to Prague, where he would meet his future wife Olda. Here and during his years of exile in London Kokoschka produced largely allego­rical portraits of women and addition to numerous political works. Over 400 of his works were confis­cated from German museums by the National Socia­lists and were destroyed in parts. Kokoschka himself, whose work was denounced at the Munich “Entartete Kunst” exhibi­tion, was declared “Art Enemy # 1.” In 1953 Kokoschka moved with his wife Olda, who he married in London in 1941, to Ville­neuve, Switzerland.

The exhibi­tion concludes with the artist’s view of himself, the group of self-portraits produced between 1906 and 1972: »And when I made self-portraits …, it was only to ascertain: What is the human being really? The human being is not merely the surface, not that part that can be photographed.«

The exhibi­tion catalogue is on sale for 38 Euros and can also be ordered in our online shop. 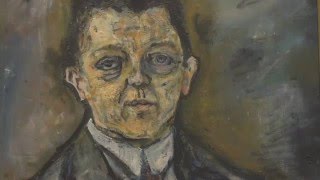